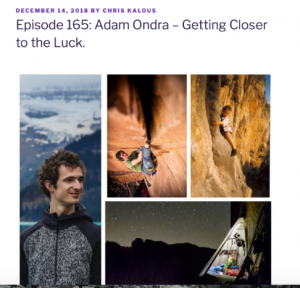 Chris Kalous interviewed Adam Ondra on his podcast (Enormocast #165) digging into how he approaches climbing. What’s his motivation? What has he learned? How does he feel about competing in speed climbing in the Olympics, something that isn’t his strength? Each experience seems to teach him something. On Silence (Flatanger, Norway) he says he learned to enjoy the process. On Salathé and Dawn Wall (El Cap) he says he never says he’ll do it. Rather he’ll do his best. Training for speed climbing teaches him to accept it and not complain.

What struck me in the interview was the tone of his voice. He seems to be on the verge of laughing the whole time. I think that’s a demonstration of his motivation. He says he loves climbing; motivation is always there; he doesn’t have to motivate himself. He seems to find balance between climbing for himself and climbing as his career. For him, the point is to climb as much as he wants to, not to make as much money as possible. His laughter seems to culminate in a simple statement that we can all learn from: “I will try hard to find the fun.”