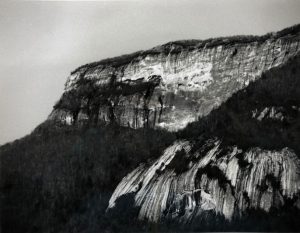 When I was younger, I was locally known as someone who was fearless and used my fearlessness to do first ascents on Whitesides Mountain in North Carolina, which is known for its scary routes. I desired to be someone important in the climbing community and these first ascents gave me a sense of importance to feed my ego.

We can all fall into this kind of trap. We want to be someone important to validate our existence. So we apply whatever skills we currently have to do routes that help us be important. This is the have-do-be approach to life. We operate from an unstable foundation of the ego, which seeks ways to validate itself. Self-importance does create stability for the ego, but it’s short-lived. Achievements validate the ego’s sense of existence. Since the ego’s existence is based on achievements, it continually desires more achievements. As a result, it’s never satisfied and we never arrive at a time when we feel stable and worthy of existence.

A focus on awareness takes the opposite approach: be-do-have. We’re aware that “being” is a given. We don’t have to prove our existence to ourselves or others. This approach allows us to begin from a stable base of being. From that base, we do routes, to have new skills. We apply skills we have some proficiency with, but we seek to improve those skills through doing routes that help us learn.

I had a mix of these approaches while doing first ascents on Whitesides. The have do-be approach motivated me to use my fearless skill to do routes that were scary. It fed my ego’s desire to validate its existence. The be-do-have approach motivated me to be on Whitesides’ scary routes because I was interested in investigating what it meant to be fearless. This latter approach revealed some unexpected fears, which helped me learn more about being fearless.

For example, I learned that striving to be respected for being fearless hid other fears. I began noting types of climbing I avoided, such as difficult sport routes. Routes on Whitesides are scary because of physical risk of falling in runout situations, but their difficulty is limited to 5.12. This grade may seem difficult, but they’re moderate relative to difficult sport routes that can be 5.15. These routes on Whitesides created a facade that covered up a fear of being judged for not being able to climb routes of higher difficulty grades.

There are many layers to our ego identity, layers upon layers of achievements that the ego uses to validate itself. We don’t really know what’s underneath all those layers until we begin peeling them off. Awareness is what helps us do this. Peeling away layers brings us to a place that’s foundational, where being is a given. We realize being as our essence; not ego. Maintaining our focus on this awareness gives us a stable base of being to operate from.

Developing awareness of the layers my ego was creating helped me understand the dichotomy between being fearless in physically scary situations and being fearful in mentally scary situations. This awareness directed me to face my fear of failing mentally and risk losing the respect of the climbing community. Testing myself on difficult sport climbs risked not being good enough to belong in the climbing community. Facing that fear over and over again, by testing myself on difficult sport climbs, helped me shift to a be-do-have approach and peel off layers of the facade my ego had created. Doing this allowed me to become more fearless in both physically and mentally challenging situations.

Tags: be do have, ego, layers, whitesides

Who is Beth Rodden Really?

How to Structure Your Day for Peak Performance