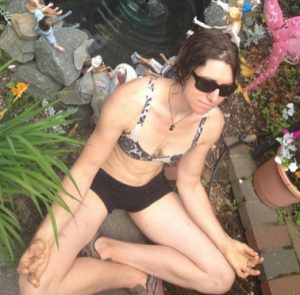 Mindfulness. I like to talk about mindfulness. I talk about the role of it in my climbing in many writings and interviews. I talk about accepting emotions, thoughts and feelings as they arise, and acting from a place of self awareness. I like to think about when to listen to these thoughts and feelings, and when to redirect and commit your attention on the task at hand. The mental game has always been a fulfilling aspect of climbing for me. But sometimes I think I like to talk about mindfulness more than practice it. When I’m actually at the crag, do I walk my talk?

Picture the scene: It was already early afternoon by the time my girlfriend Tara and I got to the Wizard’s Gate crag on the 4th of July. At 10,000 feet and NW facing, this crag provides a respite from the heat and boasts some great granite sport climbs (it’s worth bringing a light rack too, for traditional lines). We arrived to find a not-so-surprisingly crowded holiday hang.

We set down our packs and I immediately began scanning for open warm-up climbs. There weren’t many. The bulk of the routes are in a cave and corner, and the sound amplifying effect of the already rowdy groups began to grate on me. Familiar sensations of tightness and agitation began in my body. Also frustrated and fearful thoughts: “This is a problem. I’m not going to get what I want. I’m not going to get my needs met. This is impossible. I’m going to be frustrated and tight feeling all day…”  On the heels of this arrived my well-worn, knee jerk response:  Suppress!!! Stop breathing fully! Try to ignore the feelings! All of this happened at the warp speed of the mind running well-traveled paths, literally within seconds of arriving at the crag. I carried on, in another well-practiced pattern of pretending nothing was amiss while covertly trying to control the situation in an effort to get my needs met against the backdrop of my unconscious certainty that all hope was lost. Often this path “works” for me, but rarely with Tara. As instinctively as my system seeks and responds to any signs that there might not be space for my needs in a situation, hers recognizes if there is any mismatch between someone’s outward behavior and their emotional state.

Tara wanted to have a snack and a moment to sit still. She wanted to look at the topo. She wanted to talk about it. She wanted to understand where each friggin route was. She fussed over her dog, Lola. She didn’t show any signs of putting her harness on. She was being a pain in my ass!

I tried to get her on the program. I ostentatiously dropped the rope at the base of the nearest open span of rock and started suiting up. I dismissed her efforts to look at the topo and told her that if she would just get ready, I would show her the routes she needed to know. Tara just looked at me. She asked why I was rushing her. She asked if I was in my we-just-arrived-at-the-crag-and-now-I-am-antsy-and-possessed-and-in-compulsive-sending turmoil. She reminded me that she’d just been patient with my last leg of “Everest pace” hiking and my need for multiple low blood sugar snack breaks, that turned what should be a 30 minute approach-hike into an hour. She reminded me that when I take my climbing turmoil out on her she cries and gets too upset to climb, and that she wasn’t interested in just belaying today. She kept eating her apple. She still wasn’t unpacking her harness. I softened my tone and backed off a little. I know that crying thing, and it’s legit. Often she’ll let me climb the first few pitches to support me shifting into a more pleasant climbing partner. I was counting on this.

I backed off and gave her the five minutes to get ready that she wanted, but I was still super agitated. Finally we were BOTH ready and tried to figure out a warm-up climb. There were ropes and people everywhere. Everyone was being so loud! What on earth could we climb that would work for Tara, but not leave me even more bored and antsy? A woman above us was loudly cheering herself on as she pulled a roof. I felt like I was exploding internally. I snapped at Tara about something. She stepped back, raised an eyebrow, and said “I dare you to meditate right now. Five minutes.” I smiled-grimaced at her and kept putting my shoes on. Tara doesn’t meditate. I tried to ignore this misplaced attempt to help. She clipped out of her GriGri. “No sitty, no climby.” Fuck! She’s serious. She’s cornered me against myself. All furrowed-brow pouty-child, I countered with “one minute.” She raised me. “Three, miss I’m-All-About-Mindfulness-In-Climbing. 180 seconds” Fuck.

So back to practice goddamn mindfulness. Why do it? Why practice self awareness? The idea is we then use that strengthened awareness muscle in our daily lives so that we can live in closer alignment with our intention of how we want to live and carry ourselves in this life. Training mental fitness can be like going to the gym: sitting on the proverbial cushion, doing endless reps of focusing and refocusing the cantankerous mind muscle. Recently I became a Warrior’s Way instructor. Warrior’s Way is a program designed by Arno Ilgner that emphasizes awareness as the basis for all learning. I chose to become part of the Warrior’s Way community because it provides a structure for converting stress to comfort and tools for helping climbers improve their ability to stay in process and balance their ego’s orientation to end-result.

While climbing is my most regular practice in mindfulness, it is full of ego traps and competing priorities. I’ve spent some solid hours sitting on the pillow. I’ve tried to develop a daily meditation practice. I’ve attended talks at the local Buddhist watering holes in Boulder. I’ve listened to guided meditations and spent days at a time on silent retreats, walking and chewing more slowly than I thought possible, noticing and noticing and noticing. A few times I’ve used my cushion skills to sit quietly and visualize when preparing to send a route. But mostly I’ve used and benefited from the attentional demands of climbing itself as my mindfulness practice, and relied on that to help me handle the rest of my life. And when I’ve looked for other resources it’s been because climbing couldn’t always serve that function. My ego became entrenched in attaining certain climbing goals, and then inevitably came fear, frustration, and less energy focused on being present for the climb.

She set a timer. We sat down on the rope. I fiddled around a bit and thought about how one minute of actually CLIMBING would work sooooooo much better than this. I heard the other climbers. I closed my eyes. I opened them. I noticed a few people look at us. I shifted uncomfortably. I thought about crag etiquette and why this was inappropriate to do when open routes were at a premium. I tried to look like I was doing something “crag acceptable.” I thought about how that’s “bad” meditation behavior. I stopped myself. I began to settle in. I peeked at Tara. She was all-eyes-closed not moving, looking serene. I got a little pissed. And jealous. And competitive. I tried to meditate better than her. And then I heard the birds. I noticed the air on my skin. I scanned the sensations in my body. I noticed my breath. I noticed it again. I stepped into enough calm to recognize the fear story that had been driving my compulsive antsy behavior. I began to feel into the space around it. My chest unclenched. My face relaxed. The timer went off.

The climber belaying next to us asked if we had been meditating. We had a brief but lovely conversation about how it’s rarely the wrong decision to take 180 seconds of still silence. We laughed and exchanged tactics for dealing with grumpy climbing partners. We climbed. I noticed that when I started the first pitch from a place of mindful awareness, rather than using it to create that mind-state, there was more ease. More awareness of the texture of the rock under my fingers. More pleasure in waking my body up to different angles and demands. I wasn’t irritated with the neighboring party and their nonstop chatting and cheering. And, after finishing the climb, I lowered to a belayer who smiled, laughed, and even flirted with me. And it was good.