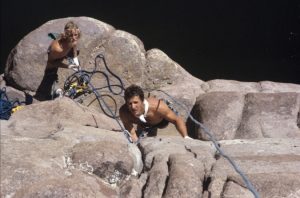 You go for a redpoint send, but don’t send. How do you feel after? You could feel frustrated, disappointed, or satisfied that you gave it your best effort. You go for a redpoint send and you send. How do you feel after? You could feel elated, or satisfied that you gave it your best effort. For most of us, we feel frustrated or disappointed when we don’t send and elated when we do, rather than simply satisfied that we gave it our best effort.
–
Feeling frustrated, disappointed, or elated puts us at the mercy of the external situation. Why would we do this? To answer why, let’s look at what is different between them. By NOT sending the end result isn’t achieved; by sending it is. We have fallen into the trap of being primarily motivated by the end result. The key word here is “primarily.”
–
We have discussed the motivation hierarchy before: being primarily motivated by the process; secondarily motivated by the end result. By being primarily motivated by the process of climbing, the stress associated with it, we feel equally satisfied whether we send or not. We feel satisfied that, for each effort, we have given our best. We may think we don’t give our best on each effort, but this is incorrect. Our physical strength, mental focus, and climbing skills all come together in each effort. We will have more physical strength on some days and less on others. The same is true for mental focus. To think we could have been more mentally focused is similar to thinking we could have been physically stronger. Neither of those is possible for your current effort.
–
Pay attention to how you feel after. There isn’t anything wrong with feeling a little more satisfied after sending than not sending. Sending a project represents achievement of a goal. It’s a test, a steppingstone, in our learning process. Just notice how big of a difference it is. If it’s big, check in with what is motivating you.
–