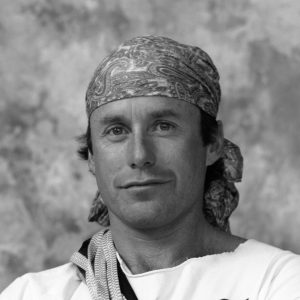 I remember Hueco Tanks, Texas in the early 1990s, climbing and training at Todd Skinner’s “Training Camp.” He’d modified his house into a training center and enjoyed hosting climbers from around the world. We could train and explore widely; it was before the current restrictions at Hueco were established. We also explored widely in our conversations about training. I’ve forgotten most of those conversations, however I distinctly remember one thing Todd said: “The benefit of being powerful is knowing you’re powerful.”

It’s interesting how we remember specifics things people say, but forget almost everything else. We tend to remember things that shock us, surprise us, or that we don’t expect. We hold certain mental conceptions. We awaken when others say things that shock those conceptions, as long as we remain open to learning from them.

I wondered what Todd meant by his statement. It seemed a bit confusing using the word “powerful” twice in the same sentence. It caused me to stop and think, to challenge my conception of what being powerful meant. It’s taken many years of studying mental training to understand such distinctions.

I experienced this recently while working on my goal project at the Obed in Tennessee: Born on the 4th of July. I’d been doing hang-board training for four months; my physical power was increasing. I was holding onto the small crux crimps of Born on the 4th longer than I had previously. However, I noticed my mind not believing that this was possible and letting go when I might have been able to continue. I needed to know I was powerful in order to apply all the physical power I’d developed.

We need to give ourselves room to believe in ourselves to close the gap between our physical and mental power. How do we do this? We have a tendency to think in chunks that are too big. We see a series of difficult moves and think about all of them. Instead, think in small chunks. Focus only on the next move. Maintain eye contact on the hold. Doing this keeps our attention focused there. I’ve seen climbers, especially in bouldering competitions, look down while their bodies are still moving upward. This demonstrates that they’ve already decided they can’t succeed in making the move. Looking down directs their attention away from upward engagement.

Don’t quit until you quit. Meaning, don’t stop exerting effort until your body fails. When something unexpected occurs, like still being attached to the rock, use it as an opportunity for your mind to learn. You’ve learned that something you didn’t expect was possible. The benefit of remaining open is you allow your attention to remain in the moment. The effectiveness of engaging the body diminishes when your attention isn’t focused there. As a result, you’ll limit the mind’s ability to catch up with the physical body and you’ll have wasted a lot of time doing physical training. And, you may never know you’re powerful.