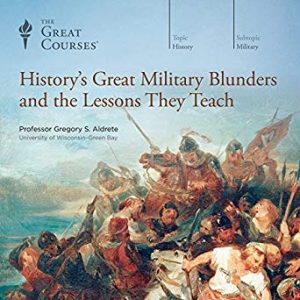 I listened to an interesting lecture series recently called History’s Great Military Blunders and the Lessons They Teach that looked into what caused certain military battles to become blunders. I was curious about which mental factors led to these blunders, what we could learn from them, and how we could apply these lessons to our mental training.

Military historian John Keegan said “All battles are, in some degree…disasters.” Battles are disastrous because order degenerates into chaos. Blunders, however, go beyond the chaotic nature of battles because they include gross, stupid, or careless mistakes.

For example, Napoleon blundered by staying too long in Russia thereby being caught in the severe Russian winter in 1812. His decision to stay was a blunder because he was too prideful to leave and admit he’d made a mistake. He lost 80% of his half-million-strong army when he finally decided to retreat, due to the severe winter snows.

Another example was George Armstrong Custer’s defeat fighting the Sioux Indians during the battle of the Little Big Horn in 1876. Custer blundered by dividing his army into smaller units so he could surround the Sioux. His decision to do this was a blunder because he was overconfident and underestimated his opponent. Most of his army was killed as a result.

The lecture series evaluated 23 military battles and identified “four paths to failure” that caused them to be considered blunders. First, failure of planning. Some blunders were caused because the objective wasn’t clear, proper intelligence wasn’t gathered, or information that contradicted what planners believed was ignored. Second, failure of leadership. Some blunders were caused by commanders being in situations that were beyond their abilities, being overconfident, or disrespecting their opponent’s skill. Third, failure of execution. Commanders made blunders due to tactical errors, such as dividing their army, which allowed it to be destroyed piecemeal. Fourth, failure of adaptation. Battles turned into blunders when commanders failed to adapt to change or clung to strategies that were outmoded.

These “four paths to failure” can be turned into learning lessons. Fighting a battle or climbing a route involves taking a risk. Risk-taking has three phases: preparation, decision, and action. Each phase is important. Taking inappropriate risks can occur when one or more phases are ignored or not completed effectively. Additionally, our motivation drives our decision-making process, which can result in disasters if we’re motivated in limiting ways. Let’s look at how we can apply our understanding of risk-taking and motivation to the “four paths to failure,” and turn them into “four steps for success.”
1. Planning: “Planning” points toward the preparation phase of risk-taking. Are we gathering all the important information or ignoring it because it contradicts what we already know? Being skeptical of what we know and open to what we don’t know can help us make better plans. In climbing, we gather all relevant information about the risk. We’re clear about the objective, the goal we seek to achieve. We also face the consequence for taking the risk by accepting the possibility of falling. Finally, we create our plan, one that gives us the best chance of achieving the goal and minimizes the consequence. Instead of failing to utilize all information to plan, we do thorough information gathering so we’re clear about the risk.
2. Leadership: “Leadership” points toward our motivation for taking risks. How we’re motivated indicates how we lead the whole risk-taking process. If we’re primarily motivated by goals, then we can be overconfident or underestimate the consequence, which can lead us to taking inappropriate risks. Being primarily motivated by learning means we take risks in small increments so we can manage the risk and learn from it. Instead of allowing our desire for achievement to drive us to failure, we’re motivated by learning from the risks we take.
3. Execution: “Execution” points toward the action phase of risk-taking. How well do we execute our plans? Do we divide our attention and lose effectiveness? Or, do we commit our attention to the task completely? Action is about the body, so it’s important to commit our attention to the body and trust it to carry us through the risk. Instead of failing to execute our plans, we commit our attention completely to the body so the task of climbing can be executed effectively.
4. Adaptation: “Adaptation” also points toward the action phase. Are we rigid or adaptable when situations change? Battles are on-sight situations; each one is new and different. Similarly, each route is new and different when we do on-sight climbing. Such on-sight situations require flexible plans and a willingness to adapt when the situation is different than we thought it would be. Instead of failing to adapt, we’re flexible to change our plans as we get new information from the changing situation.

Instead of letting our egos be prideful or overconfident, we focus on what actually needs our attention: doing a thorough risk-taking process and making sure we’re primarily motivated by learning. This shift of our attention helps us use our mental faculties effectively. We focus on executing the three phases of risk-taking so we can diminish gross, stupid, or careless mistakes that lead to blunders. This shift of focus can turn four paths to failure into four steps for success.

The Wheel of No Change