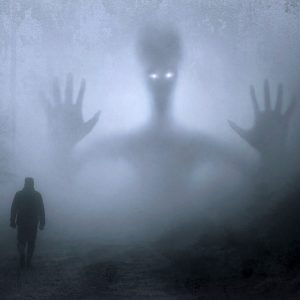 Our lives are constant learning journeys. Life provides plenty of stress that can make us fearful. Whether we’re open to it or not, life will challenge us to face our fears.

Don Juan told Carlos Castaneda a story in The Power of Silence about facing his fear. He was afraid as a young man, and manifested his fears in the form of a monstrous man, “greenish-gray, with one unblinking eye in the middle of his forehead, and as big as a door.” He begged the nagual Julian to stay in his house so he’d be safe from the monster. Julian agreed in exchange for don Juan doing menial chores and allowing Julian to teach him.

Don Juan could see the monstrous man lurking outside, but there seemed to be an invisible line encircling the house about 100 yards from it, that the monster wouldn’t cross. He stayed with Julian for three years, staying in the safety of the house, working, and learning. Julian’s teachings seemed odd, so don Juan didn’t think he was learning very much.

One day, however, he had an urge to confront the monstrous man. Castaneda continues with don Juan’s story:

“One day he found himself walking purposefully, but without any volition on his part, toward the invisible line that held the monster at bay. The monstrous man was, of course, watching the house as usual. But that day, instead of turning back and running to seek shelter inside the house, don Juan kept walking. An incredible surge of energy made him advance with no concern for his safety.

“A feeling of total detachment allowed him to face the monster that had terrorized him for so many years. Don Juan expected the monster to lurch out and grab him by the throat, but that thought no longer created any terror in him. From the distance of a few inches he stared at the monstrous man for an instant and then stepped over the line. And the monster did not attack him, as don Juan had always feared he would, but became blurry. He lost his definition and turned into a misty whiteness, a barely perceptible patch of fog.

“Don Juan advanced toward the fog and it receded as if in fear. He chased the patch of fog over the fields until he knew there was nothing left of the monster. He knew then that there had never been one.”

How to deal with fears we experience in our lives

Don Juan’s experience is a great story to help us understand how to deal with the fears we experience. If we stay within our comfort zones (houses), then fear will seem like a big monster, lurking outside and ready to ponce on us. But, when we step outside, stare fear in the face, and take a small step toward it, fear gets blurry. Then, as we continue to take steps toward it, fear turns into a “misty whiteness” or a “patch of fog”. Fear dissipates completely as we chase it.

Carlos goes on to say that Don Juan “could not, however, explain what he had feared.” How can we describe a “misty whiteness” or “patch of fog” that changes and disappears as we chase it? Fear, after all, is an illusion; it can’t withstand the scrutiny of action. This is the lesson we take from this powerful story. Illusory fears are illusions. When we stare fear in the face and step across the line that defines our comfort zones, fear dissipates.

As warriors, we lean into life to face our fears. All it takes is the willingness to step over the line that defines our comfort zones. Once we do that, we can chase fear, but we won’t catch it. What we do catch is courage because action transforms fear into courage.