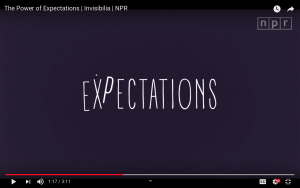 Does it help or hinder our success if we “expect to succeed?” Do expectations cause choking? Bob Rosenthal, a research psychologist, did an experiment on rats (watch youtube video). Well, not really. He used rats, but his experiment was actually done on human researchers. This is how he did it.

Bob labeled certain rats as “smart” and others as “dumb.” In reality, neither was true. Then he brought in the true test subjects: two groups of researchers. He gave one group the “smart” rats and the other group the “dumb” rats. The researchers’ job was to run the rats through mazes and record how well they did. The results weren’t even close. The “smart” rats did almost twice as well as the “dumb” rats.

Carol Dweck, a psychologist at Stanford University, says that teacher expectations can raise or lower students’ IQ scores. Other people’s expectations are constantly acting on us, making us stronger or weaker, smarter or dumber. That’s kind of scary.

Expectations can also cause us to choke. In this Freakonomics Radio episode, Why We Choke Under Pressure (and How Not To) (Ep. 341), Stephen Dubner interviewed Sian Beilock (cognitive scientist and president of Barnard College at Columbia University). Beilock thinks “that any situation where there’s expectations for success can cause choking.”

We can diminish the tendency of choking by rethinking how we’re feeling. Beilock  continues, “So, we know that when people remind themselves that sweaty palms and beating heart aren’t a sign they’re going to fail, but a sign that they’re awake and ready to go, and their body is shunting important nutrients to their mind, that can be really effective. Arousal doesn’t have to be a bad thing. It’s bad when we start thinking it’s bad, and then we just start changing our performance.”

How Do We Flow With Climbing and Life?